This lil guy is 2 months already! 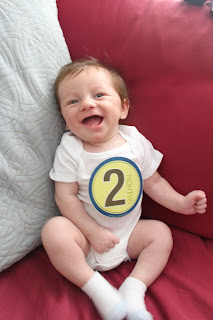 I put him in his onesie and the first picture I got was this, obviously he's excited to be 2 months old!

...weighs: I am guessing at least 10 pounds and some odd ounces but we won't get his measurements taken until the end of the month so I will update this then

...sleeps still about 3-4 hours at a time. He is doing better in his crib and mostly sleeping there now so we are getting better sleep because we are in our bed instead of the couch! He can sleep for up to 5-6 hrs at a time but you never know when that's going to happen so we just keep an ear open.

...wears 0-3 Months, he is getting too long for most of the newborn outfits so many of them are out of the rotation now. He is still very long(I'm guessing 23.5 in) but he is filling out a bit - mostly in his thighs. His belly only looks chubby after a nice big meal.

...eats: well nearly every kind of formula! We are still using a soy formula occasionally and a formula for gas and fussiness and he is doing way better. I am not sure if the formula makes a difference or just that his system is more developed so he spits up less. We haven't had any projectile vomit in the last couple of weeks (knock on wood) so I feel like he's doing better and he is definitely gaining plenty of weight so we aren't concerned.

...moves  He is always throwing his hands and arms around, sometimes hitting himself in the face. He still loves to kick his legs. We have started putting him down on the "activity gym" where he swings at rattles and watches a musical light-up sun that plays when he moves. He has begun to smile and sometimes shrieks when he is having fun with the play mat gym-thingy. He still scoots down the wedge in his crib in his sleep and will end up at the end of the crib so we are probably going to take that out soon. Here he is in his activity gym: 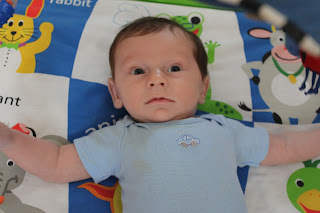 Last week Joanne, Ivory, and Sydney came to visit and meet our new addition. Unfortunately, it was the hottest week of the summer here and super sticky (unlike Denver weather) so we had to stick to the air conditioning most of the time they were here.

We went to the beach one day (we dropped Micah off at my parents) and it happened to be perfect weather. 90 degrees, light breeze, green flag, and 78 degree water in Lake Michigan! Here are a few pics from the day

The last day they were in town we headed to Zeeland for a playdate with Abbi and Elijah. Despite being a full year younger than Abbi, the girls were very close to the same height. They weren't sure how to act toward one another but once Sydney started jumping around the kitchen Abbi joined in and they both began jumping, running, and squealing! There was some confusion between them what eachother's names were so Abbi wascalling Sydney "Ivory" and Sydney thought Abbi's name was Grace but they still had a lot of fun. They pretended they were "camping" in Abbi's tent, went swinging, and had "tea"

We are so happy they were able to come to Michigan and spend time with us and of course meet Micah! Hopefully we can see the rest of the family in CO soon!

Posted by Unknown at 8:06 PM No comments:

...sleeps 3-4 hours at night. Creepily, sometimes his eyes are open while he is sleeping. We had him in our bedroom in the bassinet but he makes a bunch of noise in his sleep so we have moved him into his room across the hall. He has had some serious reflux issues so it has been hard for me to sleep well when I can't hear him because I keep worrying he's choking on his spit-up. He much prefers sleeping in our arms or on us to his bassinet. Thanks to Julie (my sister-in-law) we at least have a soft wedge for him to sleep on so he can keep more formula down and be more comfortable. He also will sleep in the Baby Papasan we inherited from Derek and Julie but only if he falls asleep in our arms first.

...wears Newborn and 0-3 Months but he is getting too long for many NB sizes! He is very long and lean yet so many of the outfits are a bit roomy in the body for him.

...eats: well nearly every kind of formula! Given my family history of dairy intolerance and his current reflux issues we have been trying out newborn, Gentlease (a more digested milk-based formula) and soy formula. So far he seems to be doing the best on the soy but we will go back to the Gentlease to see if it really makes that much of a difference.

...moves  His hands are always up by his face which adds to his cuteness. He loves to kick his legs and at times this has allowed him to move up and down the wedge in his bassinet. One morning I walked into pick him up after he began making noise to find his head hanging off the top of the wedge in his bassinet (it's not that high so it wasn't dangerous don't worry!) He LOVES to stretch and does it ALL the time - while he does this he often makes the most adorable faces, frequently raised eyebrows and puckered lips. He also has an amazing startle reflex and going over bumps in the stroller or car sometimes he will throw his arms out to the sides with fingers spread, even in his sleep. He likes looking at lights and is more alert between feedings, sometimes being up the whole 3 hrs between feedings.

Here he's contemplating something deep, am I hungry or do I want to sleep? hmm...

Posted by Unknown at 7:12 PM No comments: